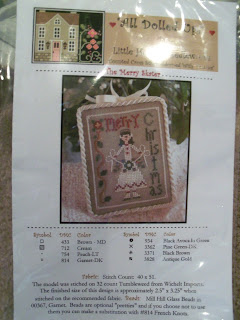 Little House Needleworks
The Merry Skater
I have an duplicate pattern. And I will give it away on Monday morning.  Very easy instructions-
1. You must be a follower
2. Leave a comment on this post-that's it!
Good Luck!
Posted by Teresa S. at 11:05 AM 19 comments:

I am cleaning out!!
Click on For Sale  or at the top of my blog-just under my header photo and check out all the great items I just added!!  First come, first served!
Posted by Teresa S. at 8:02 PM No comments:

We found out that our little grandbaby that is due to arrive in February is a girl!!  Her name (as of today) is Amber.
Who knows if it will still be Amber in February??  My mother planned to call me Marilyn (yes, for Marilyn Monroe) during her entire pregnancy.  But, her roommate in the hospital had just named her baby girl  Teresa.  My mom liked the name so much that I became Teresa.  (I grew up in a small town in Indiana and never did meet that girl-go figure). 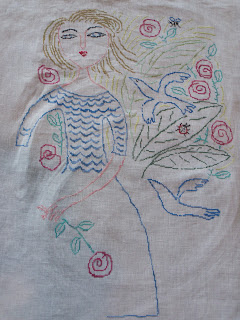 Le Printemps by BOAF is coming along.  I did iron this and am feeling somewhat concerned that this is all the better it came out?? 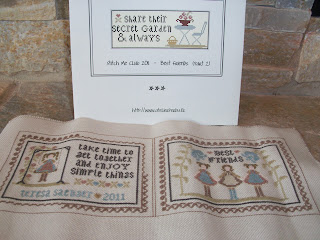 I am so pleased to be able to show you this small finish to Part 3 of the L'Atelier Perdu Stitch Me Club.    Part 1 is on the right side and I skipped Part 2 (which is pictured above the stitching) to go straight to Part 3 on the left side.  This is the front and back of the needlebook finished.
I agonized over the fabric on this project, remember??  I ended up with 28 ct evenweave in platinum color.  And I have had very few problems (well, other than the usual not being able to count, etc :)  Now for Part 2 I will be starting the inside of the needlebook. 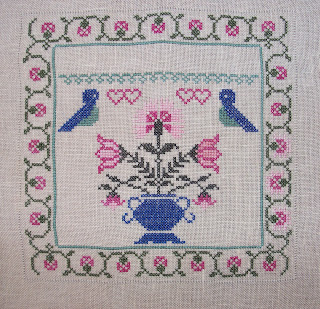 Here is the latest progress picture on the Petite Sampling Etui SAL.  It has been a froggy couple of weeks. I am using the HDF silk conversion and was concerned that the light pink was too light-(see the center flower in the jar). So I pulled out the two suggested threads on the pattern and used the DMC on the right flower in the jar. It is more of a dusty rose color. I am staying with the HDF silk so that is one future frog.  Also, the dark green stems and leaves in the jar appear black.  So I used the DMC on the border and really like it better.  So that is another future frog.  Oh, and I haven't mentioned the over 1 stitching at the top :)
Nataly, if I wasn't in this SAL, I would have put this one down already.  Thanks for including me!
In other business, I have been noticing more and more things being planned for 2012.  Another similar challenge to the Crazy January Challenge-oh, my. (That reminds me that I have 2 more to complete)  More needlework retreats are popping up.  So many are on the east coast and I am tickled to see that there is one in Portland in July. Plus my EGA guild is hosting a regional seminar in Tacoma in June.  What else are you seeing for 2012 (or 2013)?
Posted by Teresa S. at 2:08 PM 12 comments: 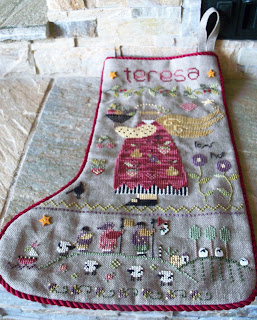 Shepherd's Bush
Anna's Stocking
18 ct natural linen
Called for threads
A Crazy January Challenge finish/finished! Didn't my finisher do a fantastic job?  I am very pleased and sorry that I waited 32 years of marriage to finally stitch myself a stocking!! 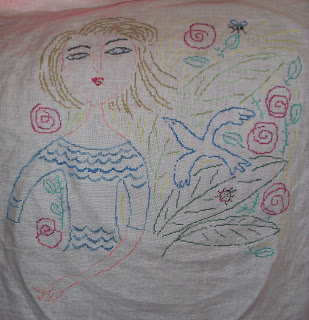 BOAF
Le Printemps
36 ct Edinburgh linen
Called for WDW overdyed threads
I bought a new iron.  Can you tell why?  :) I know it doesn't look like much is getting accomplished on this one.  But it is so huge!  Hopefully my pics will be better next time.
I am also working on my Petite Sampling Etui SAL, but no pics today.
Thanks for all you kind words and comments on my stitching.  They really keep me motivated!
Posted by Teresa S. at 4:41 PM 17 comments:

Yellowstone, Update and a New SAL!

﻿A few highlights at Yellowstone:

﻿﻿﻿
﻿﻿Of course there is much, much more to see in Yellowstone National Park, but at the end of August many of the bubbling mud pots had dried up for the summer.  I am struggling with photos today in blogger so that is it for today in Yellowstone. 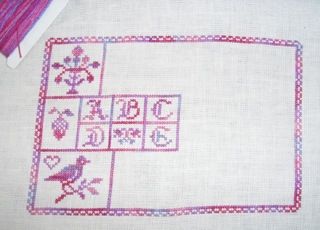 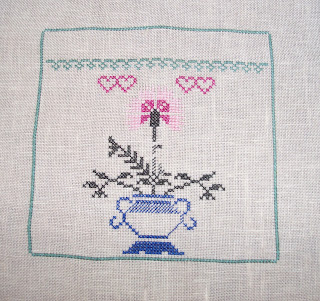 Petite Sampling Etui
Collaboration Design
Called for 36 ct Lakeside Linen Pearled Barley
Vikki Clayton's HDF Silk Conversion threads
And last, but definitely not least, I have joined a SAL with Nataly and Carol and Gabi. This sampler was originally part of my Crazy January Challenge list for 2011. But when I  had to get to just 15 items, I said goodbye to this one (but only temporarily, of course :)
Posted by Teresa S. at 3:33 PM 6 comments:

Back From Yellowstone+ An Update

Yellowstone National Park was fantastic!  Temps in the low 70's, absolutely no traffic to speak of (yes, we waited until school had started for many areas), and the friends we went with were great company!  No pictures yet, but I will share a very few soon. 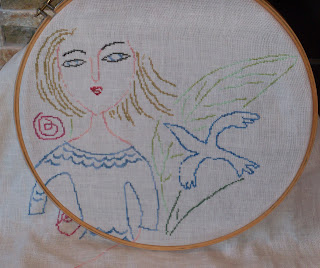 I did get a little more of BOAF Le Printemps stitched. Now that the face is in, I like looking at her while I stitch. A large amount of frogging took place when I realized that I had placed the bird in the wrong spot! 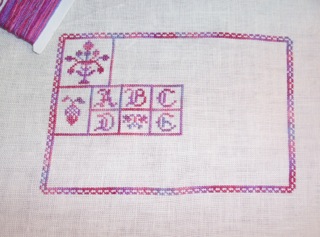 My iStitch Mystery Sampler is coming along nicely.  I am still keeping my fingers crossed that I will have enough of the HDF overdyed silk I'm using.

Blackbird Designs
Hedgerow Birds
20 ct. WDW Straw
Called for CC and GAST threads
#14 of the Crazy January Challenges is finished!  Woo Hoo!  This was my stitching project while in Yellowstone.  Easy to see in bad lighting (hotels).   Only 2 more CJC projects to be finished! If you are wondering if I made a mistake, this project is to be finished as a project bag with a liner and a buttoned top.
Posted by Teresa S. at 1:40 PM 12 comments: